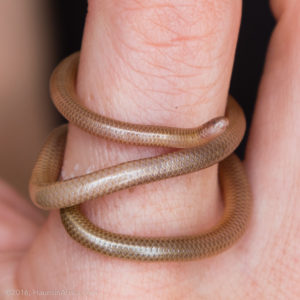 I found this little fella while digging up old drainage pipes in my yard. In Mampruli, the Worm Snake is called a kpariwaafu or “Farmer’s Snake.” Some call it kpaŋwaafu or “Guinea Fowl Snake” because the birds like to dig them up and eat them.

Here’s are some details about this tiny snake from the fantastic book West African Snakes by G.S. Cansdale.

Members of one of these small families, known to naturalists as Worm Snakes, are seldom recognized as snakes. They are very small, measuring only 5-7 in. when fully grown, and with a body about as thick as a pencil lead. The mouth is minute, with some very small solid teeth, in the lower jaw only, and these Worm Snakes feed entirely on tiny insects, especially ants and their eggs. Some 8 different species are found in various parts of West Africa, mostly in the dry country outside the high forest, but they have been collected so seldom that their habits and distribution are still little known.

The colour of these tiny Worm Snakes varies from pale brown to blackish. The scales are always rather smooth, shiny and dry, distinguishing them at a glance from worms; examined under a lens, they are seen to have no more than 14 rows of scales around the body. The eyes are scarcely or not at all visible, and the body is of more or less the same thickness throughout its length. Worm Snakes seldom come above ground on their own and are usually found by pure chance. The only specimens I received were found by small children while hoeing their farm plots. 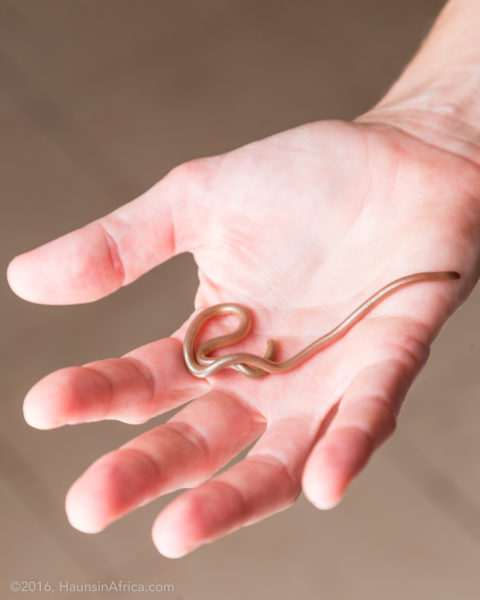