All of but one of Ghana’s mud mosques lie along the upper western side of the country. On the complete other side of the country, just a couple miles from the Ghana-Togo border, stands the most unique of Ghana’s Sudano-Sahelian buildings. Just east of the town of Garu, in the small village of Wuriyanga (pronounced and spelled “Woriyanga” by locals), stands a historic mosque in the “Djenne style.” 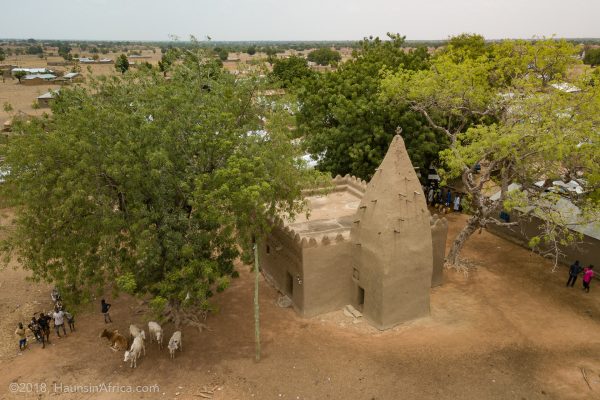 Three things immediately stand out when you see the Wuriyanga mud mosque: it isn’t whitewashed, it only has one tower, and it has no exterior buttresses. 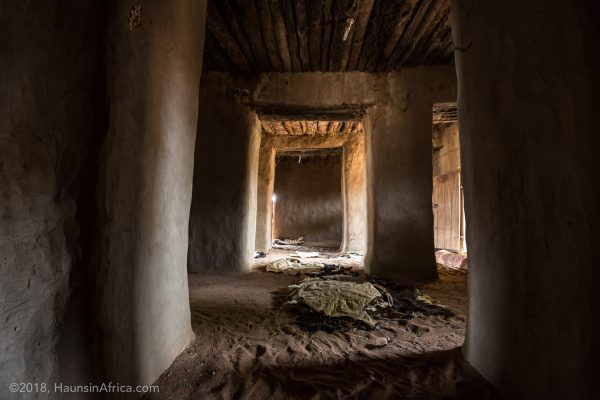 Unlike the Sudanic style mosques found in Larabanga, Nakore, Bole, Maluwe and Banda Nkwanta, its weight and flat roof are supported by very thick load-bearing walls (about a meter) and over a dozen massive columns on the interior (each about 1×1 meter in size). 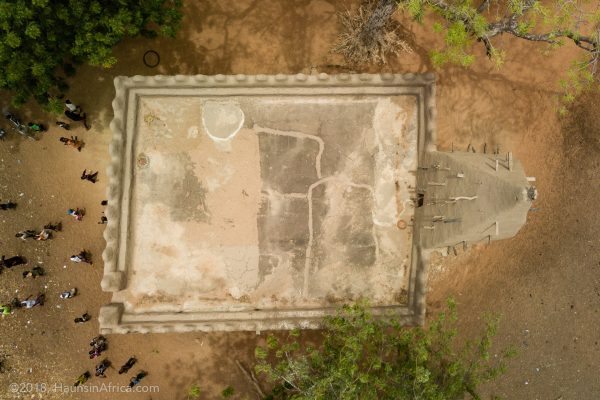 The building is rectangular in shape (though slightly skewed) with the single tower standing on the east side above the mihrab. 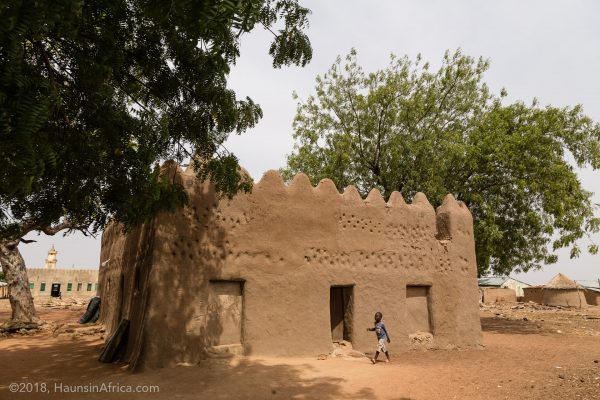 There is no stairwell leading to the roof. Instead an opening in the parapet on the west side allows a ladder to be used for roof access. 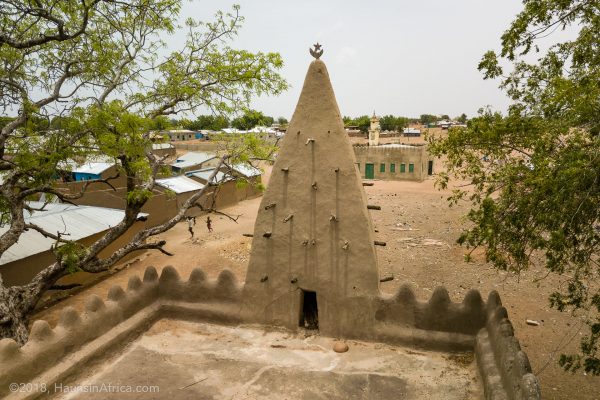 Like most Sudano-Sahelian mosques, the tower contains a small meditation/prayer room called a haluwa.

As noted on the Bole mosque, it appears that the poles protruding from the tower may just be decorative and do not provide any support to the underlying structure. 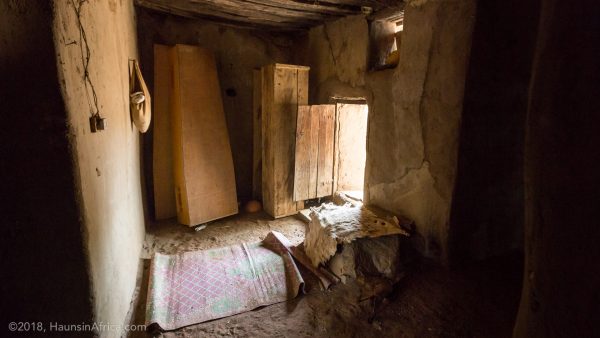 Another unique aspect to this Djenne-style mosque is its large mihrab. In the other mud mosque’s designs the mihrab is a mere niche in the eastern facing wall for the prayer leader to use. In Wuriyanga, it is a room with a window and door leading outside. There were also two coffins standing ready against the wall and a sack with burial shrouds hanging beside them. 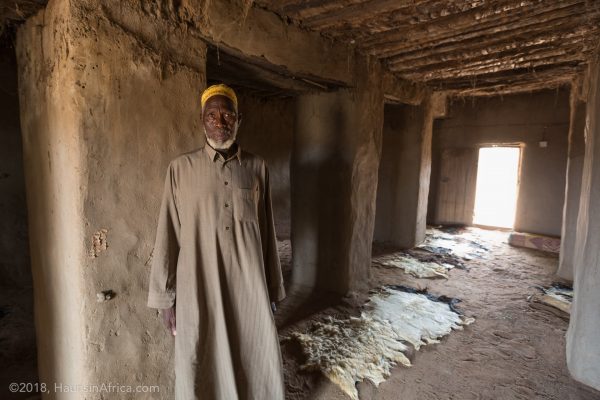 Origins of the Wuriyanga Mosque

When I visited Wuriyanga, I sat down with the imam and muslim elders of the community. They were very kind and shared what they knew about its construction. Oral tradition states that the village’s founders were Mossi muslims who came from the west around the Bobo-Dioulasso area of Burkina Faso. The area around Garu is predominantly Kusasi and they granted the Mossi migrants a place east of Garu where they could settle. The place was forested at that time which they explained was the reason for the Mossi name Woriyanga.

The Mossi settlers of Woriyanga built their first mosque in the style they were familiar with from their homeland. Unfortunately, no date could be given in regard to its age. It’s almost certainly over a century old. 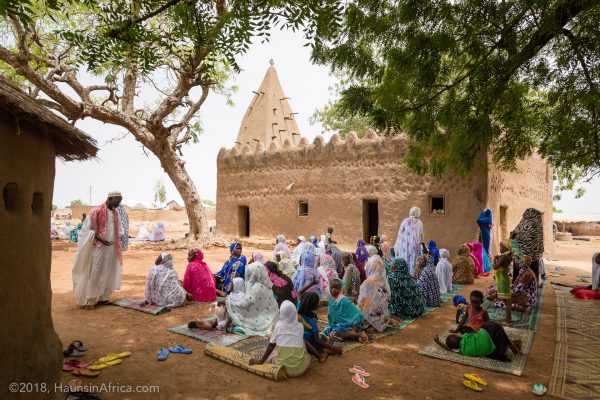 Visit Wuriyanga today and you will find the mosque still in active use. It is open for prayers daily and many still use animals skins as prayer mats when praying inside. 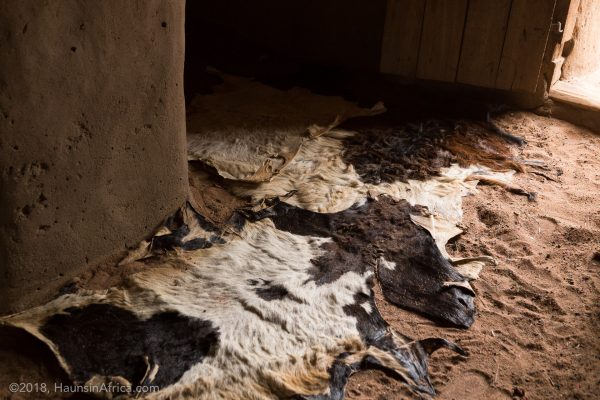 For Jumu’ah (Friday midday prayer & sermons) the number of congregants in attendance are too numerous for the historic mosque to accommodate. A newer, larger mosque has been built just to the east. Every Friday, men gather there to pray and hear the imam’s sermon while the women gather in and around the mud mosque.

Those wishing to visit the mosque can take public transportation to Garu. It would then be necessary to seek out a taxi or moto to take you the final 14km east to Wuriyanga (incorrectly labelled on Google Maps as “Warinyanga”). The mosque is located just south of the main road by the village market. 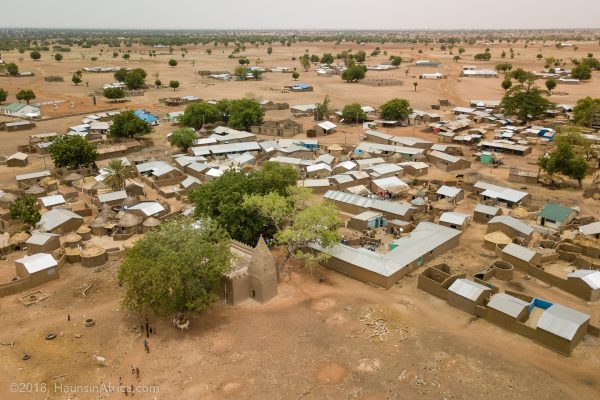 This historic monument is not yet officially affiliated with the Ghana Museum and Monuments Board and therefore has no visitors registry to sign or posted fee to pay. It is still appropriate to pay the imam a 10cedi entrance fee per person just like all the other historic mosques in the Ghana. 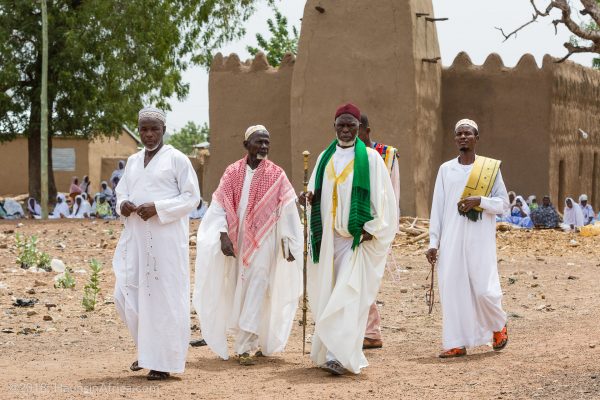 When visiting, it is important that you speak directly to the imam or his associate to request permission to photograph and enter the mosque. If you let anyone else in town escort you (no matter what title they claim), your visit will be denied. 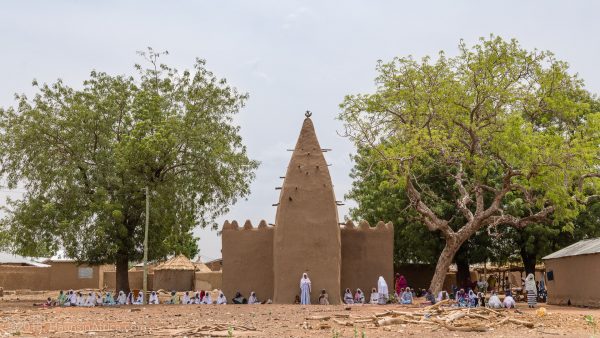 Be sure to check out my other posts about Ghana’s ancient mud mosques: Larabanga, Nakore, Maluwe, Bole, Banda Nkwanta