Maluwe is a small village just east of Bui National Park by which the Wa-Techiman highway passes. Its mud mosque sits right on that heavily trafficked road. Unlike most of the other mud mosques in Ghana, it has not had a larger, more modern mosque built to replace it. Instead some modern building techniques have been used to expand it to accommodate more people.

A Unique Update to Sudano-Sahelian Architecture

The mosque follows the Sudanic style with two towers that are much taller than Bole mosque‘s but don’t quite reach the impressive heights of Banda Nkwanta’s mosque. According to the current imam, the northwest tower (left) has collapsed twice and the one standing is its third reconstruction attempt. 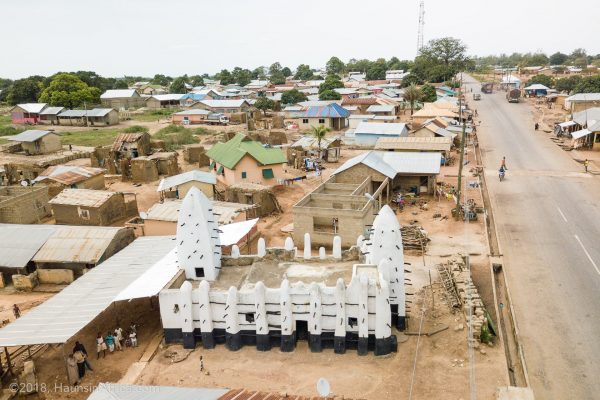 One unique aspect to this mosque is that it is longer than the others in the region. It has more of a rectangular shape than a squarish one.

This is because the back quarter of the building is what appears to be a recent addition made with cinder blocks and cement, and plastered to appear like the rest of the mud building. Notice how the last two buttresses on the back side (west) are a bit thicker and more boxy than the others. If that new addition were to be absent, we’d be left with a mosque much more like the shape of the one in Nakore. 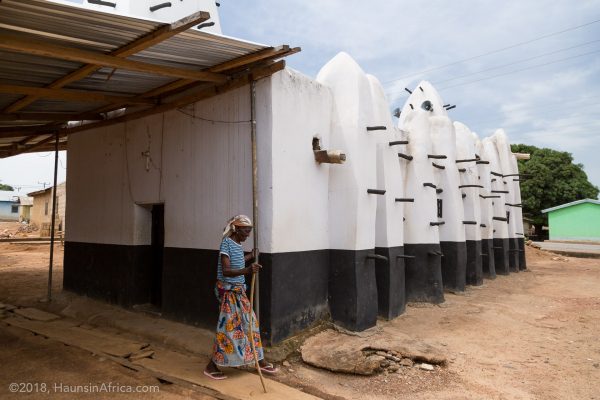 A view of the back (west) wall of the mosque also reveals its more modern construction technique. There are no buttresses supporting the northwest and southwest corners and instead there are sharp corners. Such unsupported corners are possible only with a cinder block construction.

If you look at Google’s Street View images from May 2016, you can see the major changes that were made in the last two years. 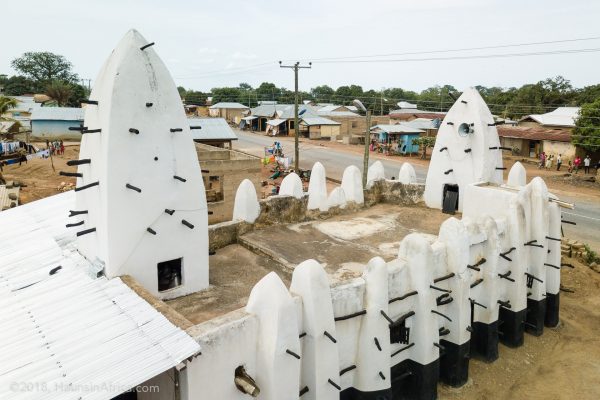 Looking at the flat rooftop you can see that the back side of the flat roof drops down a bit as if it was a separate roof added later. Another interesting evolution in style is that the northwest tower doesn’t contain the stairwell to the roof as Nakore, Larabanga and Bole‘s mosques do. Instead it’s a small storage room (with some old megaphones in it). Access to the roof is via a very small door in a raised portion of the roof next to the east tower. I was unable to enter the mosque and see if it was a stairwell or just a ladder.[1]

The Origins of Maluwe Mud Mosque

I was lucky to meet and speak with Mr. Baba Yousif, the fifth imam of the historic mosque. He is a kind, soft-spoken man who was happy to tell me what he knew of the mosque’s history. He recounts that his father, who was the fourth imam, said the mosque was built in 1942. He can even give the exact date that it was completed because his father was drafted into the British Army the week after they held their first Friday prayers in the new building (Yousif has his father’s enlistment document to prove it)! 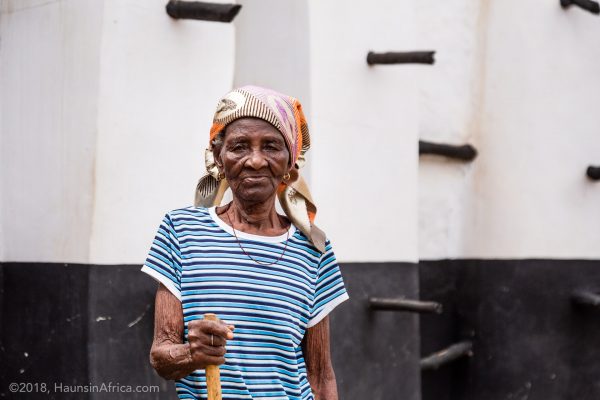 The imam’s mother Aisha Yousif is the oldest living resident of Maluwe, Ghana. She was a young girl at the time of its construction.

Imam Baba Yousif also shared with me that this mosque was build by a muslim missionary from Mali. The man had passed through the region and built five mud mosques along the way. Yousif claimed that the first was in Mandari (now destroyed), then Bole, then Dakrupe (also gone), then Maluwe, and finally Banda Nkwanta. It’s an interesting idea but doesn’t seem to match up with research presented by other historians and archaeologists.[2]

There was no visitor registry to sign at Maluwe nor did Mr. Yousif require any fee to look at and photograph the building. Like Larabanga’s mosque, entry by non-muslims is forbidden so I don’t have images of the interior or any idea of its condition. 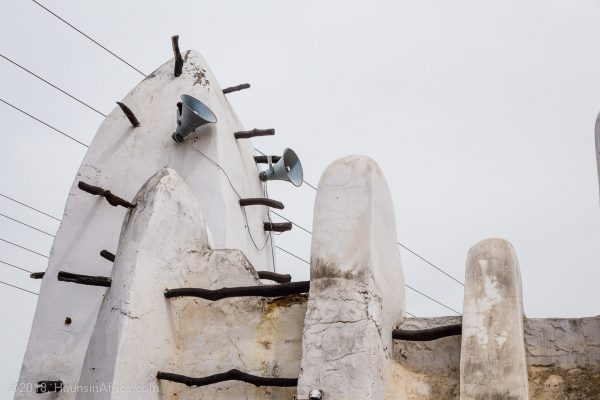 1 The imam mentioned that some archaeologists from Europe visited his mosque and surveyed it to “put in a book” a couple years ago. I’m wondering if it was Genequand’s team he was referring to. They published details of surveys of Banda Kwanta (to the south) and Bole (to the north) in the Journal of Islamic Archaeology Vol 4.2 but left out Maluwe. Perhaps the modern alterations to the structure made it less relevant to their historical study.

2 For example, Denis Genequand says the Maluwe imam told him it was built in the 1930s in the SLSA 2015 Annual report. He makes no mention of the Malian missionary account nor does he link the construction of the Bole, Maluwe and Banda Nkwanta mosques.

Be sure to check out my other posts about Ghana’s ancient mud mosques: Larabanga, Nakore, Bole, Wuriyanga, Banda Nkwanta