I’ve always been a bit scared of hippos. I think it started in Ivory Coast when a missionary shared a horrific testimony about being attacked by a hippo. Then in 2008, I saw a hippo attack victim first hand at BMC (and I saw ‘justice’ served to the aggressor).

The hippopotamus is considered one of the most dangerous animals in the world because it is so aggressive and unpredictable. Add to that the statistic that they kill about 3000 (!) people a year and you’ll understand why I was hesitant to get in a dug-out canoe and approach them on the Black Volta. Nonetheless, after a bit of research I understood the importance that Wechiau plays to protecting these large, amphibious creatures in Ghana and wanted to support that community with a visit and some advocacy.

A Brief History of Ghana’s Hippos 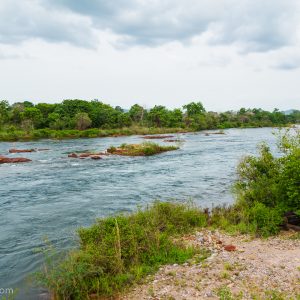 Ghana has two remaining populations of hippos and both are in the Black Volta. The Wechiau Hippo Sanctuary protects one population but 80% are found farther south on the same river in Bui National Park. The species is considered endangered in Ghana but is really in danger across all of West Africa where hippo populations were estimated to have decreased to a mere 7000 as of 2001.[1]

The Bui National Park population is under serious threat – mostly due to the construction of Bui Dam which flooded a large portion of the park. The environmental impact of the dam was a subject of great controversy. It seemed that pro-Bui Dam officials were trying to censor information about the negative impact of the proposed project. It didn’t help that after commissioning British biologist Daniel Bennett to study the hippos in 2000, they banned from continuing his research in the park in 2001 when his conclusions were not looking favorable.[2] Instead, Canadian firm Acres International was hired to perform the Environmental Impact Study for the proposed dam.

Mr. Bennet objected to that study on the grounds that “an assessment paid for by the organisation constructing the dam does not constitute an acceptable level of research if the area is to be destroyed.”[3] The following year that same firm was convicted in Lesotho of paying $260,000 in bribes to win contracts with dam projects.[4] So it comes as no surprise that the official Environmental Study report they released in 2007 claimed that the Bui hippo population would actually benefit from the dam.[5] 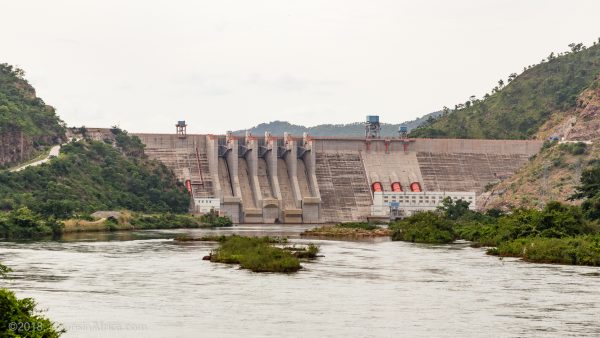 When I visited Bui Dam in person and chatted with employees there, they told me that they have had problems with locals killing and eating the hippos displaced by the newly created lake. A problem the 2007 Environmental Study report predicted (p.173).

With the future of Bui National Park’s hippos in limbo, Wechiau remains vital to protecting the hippo population of Ghana. However, it too is under threat from poachers, loggers and land development. Another problem is that it only protects 1.5km of land on the eastern shore of the Black Volta River (Ghana side). The Burkina Faso side does not participate in the sanctuary and thus farming and logging activities continue on the western banks. One needs to just glance at my aerial photo below and you can see the difference in vegetation between the Ghana and Burkina Faso sides of the river.

Thanks to generous financial support from the CalgaryZoo in Canada, the local community of Wechiau and its leaders have become very active in protecting the hippo population found on their stretch of the river. They have educated their community on the value of the hippos and the ecology of the river. They’ve made great efforts to start an eco-tourism industry in the area with a visitor center, trained guides, organized cultural activities and a guesthouse/lodge. Their biggest obstacle, in my opinion, is their remote location. Public transportation to the area is a huge challenge and when I glanced at their guestbook on my visit, they had only had about a handful of visitors in the last month.

Visitors pay a moderate entrance fee of about 15GHS (less than $4) and about that same about for a boat tour with a guide. If you don’t have your own vehicle you have to hire a local taxi or mottos to take you all out to the river. 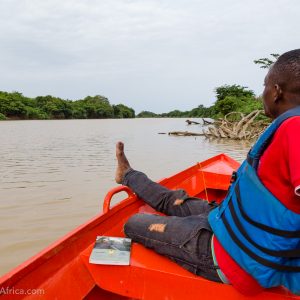 My fear of being dangerously close to hippos in a rickety boat was gone when I climbed into the nice, aluminum boat (courtesy of their Canadian friends). I also found our guide Abudi to be very professional. He was keenly aware of the hippos’ behaviors and moods and kept a respectful distance (respectful the hippos and to me!). He also thoroughly narrated the hippo sanctuary’s history and the survival habits of the creatures. We saw about eight hippos in total and the current population is estimated at 36.

I only took an hourlong tour on the river before continuing south on my roadtrip. However, should one desire to stay longer in Wechiau there are some other things to do. Bird watching is spectacular in the sanctuary due to the restrictions on logging and farming (see my Malachite Kingfisher below). The Lobi/Birifor people have a fascinating culture and you can have immersive tours organized via the Hippo Sanctuary’s visitor center. I find Lobi architecture to be really interesting (flat roofs and interesting wall plaster techniques) but their balafon (wooden xylophone) music is the best. It’s totally worth paying to get a private performance from local musicians.

Finally, here is some aerial footage of the Black Volta in the Wechiau Hippo Sanctuary:

[1] “The abundance of Hippopotamus amphibius in the Black Volta River at Bui National Park, Ghana.”

[3] Researcher Daniel Bennet created a website documenting his objections to the Bui Dam and his ban from continuing his environmental impact studies.