Banda Nkwanta is a small town sitting at the intersection of the Bui Dam road and the Wa-Techiman highway. Its Sudanic-style mud mosque stands tall – very tall – right at that junction. Of all the mud mosques in Ghana, it has the tallest towers. 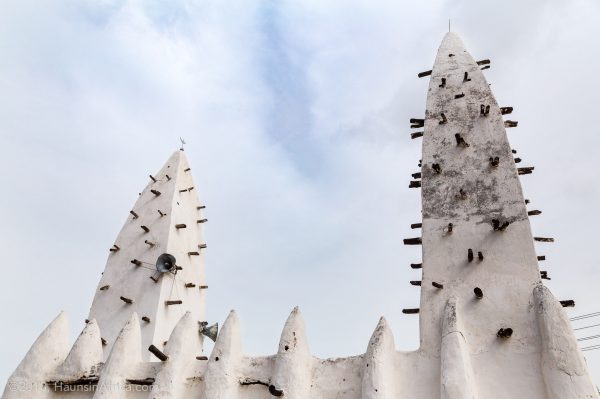 The eastern tower over the mihrab is about 42 feet high (12.8 meters). However, in 2017, Denis Genequand noted in the Journal of Islamic Archaeology (Vol 4, No 2) that the tower was recently destroyed and “its subsequent rebuilding with concrete breeze blocks and perfectly vertical faces in the lower part instead of the original slightly conical shape.”

While a couple of the mud mosques have had the urban jungle encroaching on them (Larabanga, Bole and Maluwe), it really stands out in Banda Nkwanta. The electric company has installed power poles, lines and transformers right next to the building. It’s quite a stark contrast to the ancient design.

I visited the mosque during mid-day prayers and wasn’t able to go inside. I’m not sure if non-Muslims are allowed to enter when it isn’t in use. However, judging by the access the European archeologists had to survey the place, I’m guessing it’s permitted.